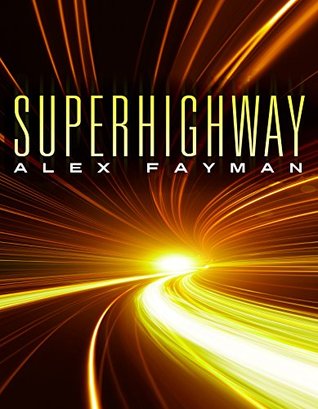 Alex Fayman’s Superhighway is a speculative fiction novel that is a mix of techno, science fiction, dystopian, and thriller elements. Superhighway is a good first start for Alex Fayman. His idea, the transporting of humans through the Internet via network fibers is not unlike the “Beam Me Up Scottie” of Star Trek. Fey’s invention is another medium, another version . Alex Fine a/k/a Alex Knot is a teenager that is looking at his future. Stanford University is his next stop until his life is changed forever by his grabbing a network cable. Alex’s abilities are rare, unheard of and have a feel that is quite similar to Susan Kaye’s Quinn’s series, Mindjack. It’s his first trip and from there Alex takes on the world. Like most young males, he has a series of girlfriends, one quite serious, and the rest, the typical stuff of youth. It is how he meets them that is quite different. He literally appears in a specified locale, goes in search of food and then starts after whatever he came looking for. The locales run the gamut, from Puerto Rico to Geneva to L.A., his base and from where the story opens, after the prologue.

A word about the prologue. Don’t give up on Superhighway after finishing the prologue. It covers new territory, world-building to a limited extent. The prologue can be difficult to decipher, but it gives you necessary context for the rest of the story. Take it at first blush and move on. Let the author get into the story he’s trying to tell. If you love books about orphans and their tales of their lives during their childhood and young adult years, Superhighway is also for you. Alex Fine is an orphan with unsuccessful times in foster homes. He is intelligent, an introvert, and a joy to what I term the headmistress of the orphanage. They form a special bond one that lasts through time. As with a lot of youths that I have dealt with through my work, Alex is adrift in the world and he feels unloved and unappreciated by the larger world. Initially his escape is the world of books; later, it becomes the world of computers, more particularly, the Internet.

Through his finding and discovering this new world, Alex seeks to right the scales and to some degree he does. Alex Fine is a pre-apocalyptic Robin Hood. His story is a coming of age, a get rich story, a finding, and losing of love, and Superhighway is in some ways a cautionary tale about youths that rush headlong into worlds and encounters for which they know little or nothing about. Superhighway is a YA book for older teens (16 and older who are somewhat sophisticated or street smart). Although radically different in time periods, narrative styles, and genres, Superhighway and Jennifer Reinoehl’s The Inconvenient Widow contains the same moral instruction and an impulsive protagonist with a stubborn streak that finds that for every actions, there is a reaction. Sometimes life is the immovable object or the windshield.

As to the end, some will not like it, but I found it refreshing. It is a cliff hanger, for another book in the future?

A few things that bothered me: a) Alex is still human, yet he understands Dutch. He can read it without any prior instruction or study. I would have preferred if there had been some lead-up that gave me this information without me having to assume that he understood a foreign language that he had never encountered before. After all, computers have translation programs and humans are not generally born knowing a language, especially not a foreign language right off the bat; b) Some of the language in the narrative is clunky (decisively Googled?) while there are other parts that are so lyrical (skyline orange, beautifully different, annihilated my moral compass);and  c) Grammatical errors such as missing or wrong words, punctuation, and use of contractions in non-dialogue areas.

Superhighway is a well-crafted tale that resonated with me and my love for speculative dystopian pre-apocalyptic fiction. The description of South Beach and Miami, Florida was spot on. I have been there and felt like I was there again. The language matures as the main character matures while maintaining the goofiness so often present in teenage love (and lust) when Alex meets and interacts with the opposite sex. Alex’s trips through the Internet made me think of the Trans-Siberian Orchestra. Both break new ground in the odd, unexpected, and experimental ways.