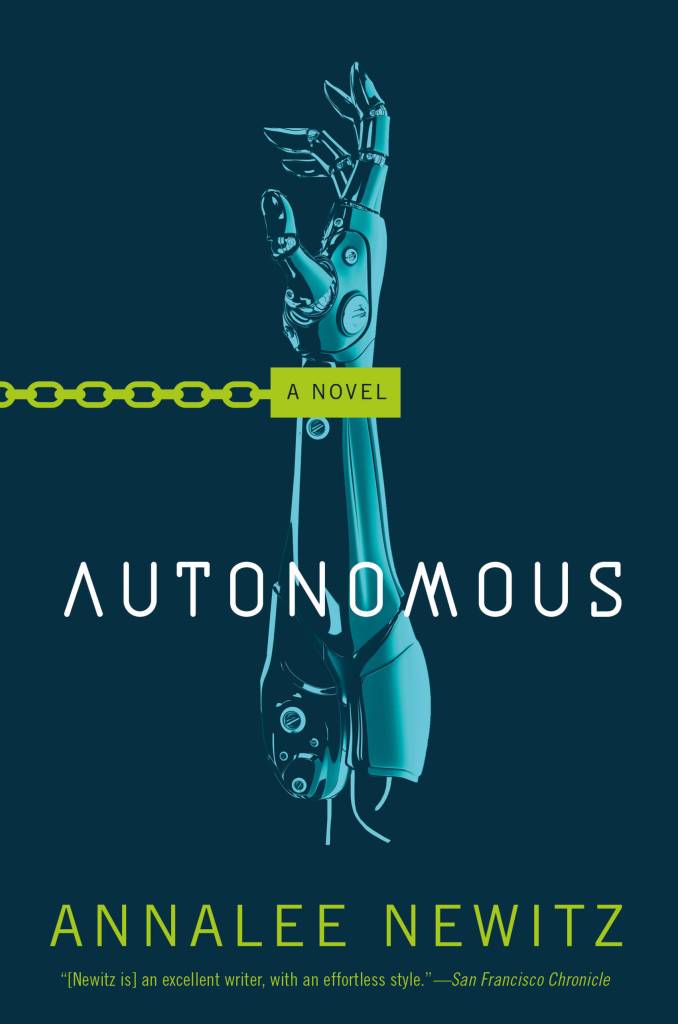 Judith “Jack” Chen is a pirate biologist-engineer that reverse engineers patented drugs for delivery into the hands of those who need the drugs but cannot afford them. Eliasz and Paladin, a bot are investigators sent out by a governmental agency, the International Property Coalition (IPC) to stop the release of these pirated black market drugs and to capture Jack.

One of those drugs is Zacuity, a feel good drug that has been all the rage for its positive benefits when given to workers who need to perform at work. However, as with all drugs, there are negative benefits. These negative benefits are exposed in Jack’s reverse engineered Zacuity. The drug is highly addictive to the same degree amphetamines and opioids are (though not necessarily in all the same ways). When a person takes Zacuity, whatever they were doing at that moment, they want to do and will do without stopping for breaks, food or water, or sleep. It is a manic-driven obsession. Suddenly, the worker get enough of whatever project they are working on; the painter wants to paint all the time; the person watering the grass waters everything all the time, the camper building a fire builds more and bigger fires, etc. Obsessions disregard any other values, including the health and safety of others.

Autonomous is written in chapters that flip from different time periods telling Jack’s story from youth to college to post-college work in academia to work in free experimental labs exploring on the fringes of academic and professional worlds of Big Pharma to arrest and conviction after straying over the line to the beginnings of pirating Big Pharma’s patented drugs after Jack’s release.

Autonomous also explores robotics and human interpersonal relationships with artificial intelligence, that is bots who have the capacity for detecting and replicating emotions and responses including those involved with sexuality with their human masters. Paladin is one such bot. The author develops a human-bot sexual bond between Eliasz and Paladin that explores LGBT issues (from homosexual to transgender as Paladin discovers the origins of her brain to heterosexual).

Newitz introduces a comparison of the life of slaved, semi-autonomous and autonomous bots and the trafficking of slaved humans, humans that are contracted, or autonomous humans. Jack was once a contracted human, which in essence is an apprenticeship. The other two categories are self-explanatory. Threezed is a slaved human that along with his master robber has invaded Jack’s ship (and home) in the Arctic. Threezed is a natural with computers and all things electronic; he is also a sex slave.

The world is the typical dystopian, after life on Earth has changed (though how is unclear, more would have been nice). There is an interconnected world government with sub geographical and policy areas that are termed federations. Part of the story is set in Las Vegas (Nevada), California, Africa and Canada.

Newitz’s Autonomous is an engaging narrative even with amount of world-building necessary. The techno terminology (both in the various labs and as to Paladin during repairs and the installment of various components) is extensive and at times is challenging, more so than the scientific terms. It would be have been helpful if there either had been a glossary or some of techno words defined in the text. Also in the chapters that delve into Jack’s history (particularly after her release) introduced initially disorder and a break in the continuity in the narrative. Like a brief paragraph coming late in the narrative about the origin and the human’s (Lee’s) reason behind Paladin’s sexuality component, these sections about Jack’s prior history is relevant and explains why Jack is like she is and why has gone down the piracy road. As for Paladin’s sexuality component, it took this reader three readings of that brief paragraph to figure out what Newitz was trying to get across.

A copy of Autonomous was provided by TOR, the publisher through its book club  program.