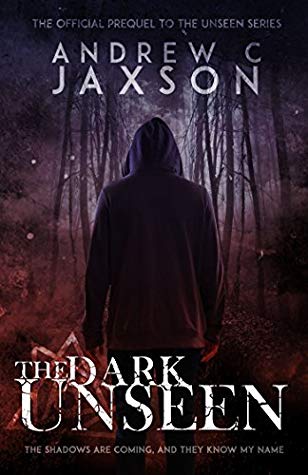 Creepy and forbidding, that is what Hud and Bek faces during a run for their lives. It you want a short story, try Andrew C. Jaxon’s The Dark Unseen. At 78 pages, it is a short gripping young adult read that is a blend of horror and fantasy not full of gore for its own sake but full of good old fashioned scariness (and a tiny bit of gore). Hud(son), Bek, and Dan(iel) are three teenagers camping in a national forest celebrating graduation, before Daniel goes off to find his fortune … or rather job after job. Hud and Bek have been dancing around the beginnings of love … or as Hud calls it … day 999 in the friendship zone. It is not a bad place to be but Hud wants more. He has the usual problem that many teenage boys (and some men) have … how to tell the girl who has been your friend for years that they are ready to kick the relationship up a notch higher (without losing the friendship). Hud’s best friend, Dan knows this and is the usual prankster, doing his part, egging on his friend to get on with it … ask her already.

While trying to figure out how to untie his tongue, throughout the night, Hud has been having weird feelings about what may be in the woods. He writes off the sounds to animals. It is after all a national forest. Coming back from picking up wood to restart the campfire that has died, Hud hears and feels something. Again, he decides it is animals.

Eventually Hud and Bek work out their relationship firmly moving into the boyfriend-girlfriend strata. Later, they go to sleep in the tent that they share with Dan. Between the knoodling and close quarters, Dan is eventually awoken by an accidental kick to the head. Dan eventually leaves to go back to where they left his car on driving into the forest. Then, Bek wants to go skinny dipping in the river near the waterfall. They do. The frigid waters enlivens Bek; the hairy swirl around Hud’s legs does not. Lo and behold, it is a lifeless, bloodless Dan, his face a strained mask of horror and death.

From there it is a race with death for Hud and Bek as the darkness (a shadow creature of supernatural origin, strength and power) comes out the woods and chases them after they have reached Dan’s “bomb of a cruiser” on their way to get help. With no keys, the only option is to coast the car downhill … with the creature trailing after them. Bek ends up with a broken leg after the cruiser crashes into a tree.

As it turns out, the ranger’s hut where they seek help is anything but. It is not an ordinary ranger but one connected or familiar with the darkness (not sure about which). The ranger (and his compatriots further down the hill) have other plans, plans involving the death of Hud and Bek. It is then that Hud discovers his own powers, powers that are related to a recollection of a former life that has the semblance of a dream of Hud’s and which has been playing in the background. It is a recollection that is related to the darkness, and a recollection known about by the ranger.

Hud and Bek end up all right, eventually, thanks to Hud’s powers and the darkness’ feeding off those who Hud’s powers had stopped and to a stranger (with others) who understand what the night has unleashed.  As Hud and Bek are leaving for safety (and to treat Bek), Hud knows that his safe former life has ended and that there is more to come.

This is where the prequel ends and The Fire Unseen, first book in the Unseen Series begins.

The narrative moves and hooks the reader from the very beginning. The novella is well-written and well-edited. Jaxson is a talented writer with a wicked imagination. Read and be scared!

The author provided me a copy in exchange for an honest review.