If you want a thriller with an Army CID officer that features a kick-ass female supporting role where the plot is based on a tightly-written fast paced narrative and where specialized knowledge of either the military or crime scene forensics and investigations is not required, read David Baldacci’s The Escape. 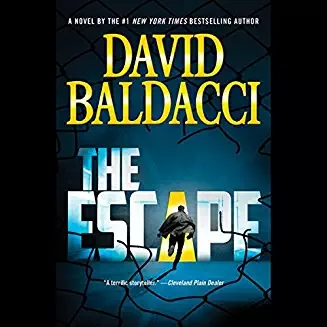 The Escape is Book Three in the John Puller series. However, you can read it as a stand alone or out of order. Baldacci gives enough background detail (i.e., backstory) in each book that I have read in this series.

John Puller, Jr is the Army CID agent and like most thrillers, he is more skilled, better fit, and definitely more trained than your average Joe. John Puller is the younger of two brothers and the son of the legendary General Puller. His older brother, Robert Puller, Jr., a former rising star in the Air Force is in Leavenworth Military Prison (DB) having previously been convicted of treason at the start of the novel and when all hell breaks loose. Robert Puller escapes and from there the narrative takes off.

John Puller knows that if anyone else locates his brother first, Robert Puller will likely be put to death for in escaping, he killed a man sent to murder Robert Puller. And, too, John Puller will then never be able to learn the truth — whether his brother is in fact guilty of selling and giving of secrets to the nation’s enemies.

Puller begins his investigation despite the orders of his commanding officer to not become involved and despite misgivings. Eventually he joins forces with some of who sought to find Robert Puller. Puller enters a maze of intelligence agencies, political organizations and military might collide and work against each other more than they work in concert with each other.