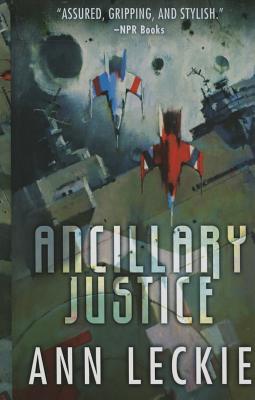 This book one of a three part series. Read this book first, then the next two, for Ancillary Justice sets up the other two. The world created by Ann Leckie is not one that will be familiar to most readers, even those who read primarily science fiction. Part of it is Leckie’s writing style that to this reader seemed a lot like Ayn Rand. It is terse prose that admits little feeling even though there is a lot of emotion under the surface. I felt detached from the narrative the entire time, though it is well-plotted and the characters, some human, some machine or robotic-like, some a mix are complex.

Another aspect is that the characters are somewhat different than and also somewhat similar to others in science fiction novels and story lines (such as Star Trek) — machines and ships are able to form human-like attachments to their masters; they have feeling;

some of the machines were once humans and for all the world look human;

there is a lack of the use of gender in one of the worlds (the Radch) but yet the protagonist, an ancillary (Justice of Toren aka Breq) refers to other characters sometimes as she or he which can be confusing until you learn to read past the switch in pronouns; and

there exist multiples of humans and ancillaries that can be, and are in, different places at the same time, connected to each other (in a way like the Borg on Star Trek, but the collective in Ancillary Justice is not a homogeneous one-mind controlling all bodies) though not in all ways and they can be disconnected from each other and still function, even contrarily to each other.

The plot boils down to Justice of Toren seeking to obtain justice after her master, a Lieutenant An is ordered executed by the Lord of the Radch. Justice of Toren is the executioner. The rest of the book is what led up to Justice of Toren’s master being executed. The reader however doesn’t start out knowing any of this when the story opens. There is a flow, a mixed up one that goes back and forth between present and past but it makes the narrative great.

Ancillary Justice is an entertaining read (or listen-to in my case). Given the above, it is however not a light easy read. There are also slight nuances that the author puts in that are critical to the rest of the story. Read it slowly and deliberately.