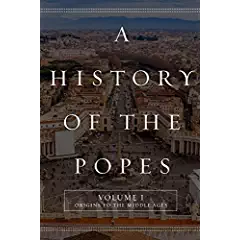 This is a short book, 124 page including references, of brief biographical sketches of popes from the time of Peter to the Middle Ages. It is broken out into several different readable periods. Along the way, the author defines the various doctrines that have been debated and either incorporated into the doctrine of the church or were deemed heresies, gives an overview of the temporal, social and political, world, sets the Anglo-Saxon world (England) into timeline/fold of Catholicism well before Henry VIII broke with the church, describes the leaders of various nations and their effect on the papacy, and shows how the region that includes the Vatican was created, expanded and narrowed over time and why.

A reader not versed in the history of larger world in the covered times, or to a lesser extent, words and phrases used in Catholicism would be advised to have some electronic source handy as knowing a bit about the history allowed me to put the actions of the various popes in context with what was happening in the world at the time.

Papal history, like a lot of other histories, is filled with intrigue and murder, of ordinary men, monastical figures, clergy, and from time to time criminals and the backslidden. Wyatt North is to be commended for not glossing over this negative history. A History of the Popes is a good beginning to an in-depth study of Catholicism and its history.