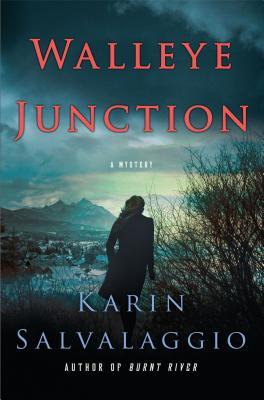 For readers of mystery and crime set in the American West, Karin Salvalaggio’s newest novel, Walleye Junction (Macy Greeley #6) does not disappoint. Macy Greeley is a roving detective that is the lead investigator into the kidnapping, turned murder of a controversial talk show host Phillip Long. The story is set in the small town Walleye Junction, Montana (not to be confused with the fishing lodge in North Dakota). Like in most small towns, history goes way back—everything is related and intertwined. As one character says there is no anonymity in a small town. This pertains to the investigation–though Macy does not know this when the story opens—and to Macy’s personal life.

Macy like many of the characters in Walleye Junction has a troubled past, lots of baggage, that tends to influence, and get in the way of her future. She has some bright spots—a demanding job that she loves, a two year old son, her mom, and a boyfriend that is mature enough to eventually realize the catch Macy is.

Phillip Long to this reader seemed to have gone through a mid-life crisis. In the process ends up dead. He simply does not act the way his wife and daughter would have ever thought. When he is murdered on a dark rainy blacktop out one night, they must confront their changed husband and father. The past, never far behind, comes back with savage intensity. During this time the daughter, Emma learns that what she thought about her friends, parents, and her boyfriend during her high school years was filled with half-truths, a facade to cover up the warts. The same is true for Emma’s mother though the effect is worse because she must confront the reality that her husband has not only stop confiding her but had also betrayed her. How much she may never know.

Walleye Junction’s strengths are: a fast paced mystery that keeps the reader’s interest; development of the main characters though I would have liked to have known more about Gina; and a conclusion that is not the typical but unreal all-ends-well where the characters are made normally perfect or near-perfect at the end. Salvalaggio’s characters remain intensely conflicted. In a small town such as Walleye Junction, this conflict is likely to keep the past alive and to continue haunting its residents.The weaknesses: when one of the co-conspirators is arrested, it is unclear who the character was referring to in the confession to the police as to who was involved; Phillip Long’s funeral service, I thought was much earlier in the narrative but it shows up again at the end; and Phillip Long’s wife’s grief for her husband was not credible given her seeming closeness, in a romantic way, to the likely architect of her husband’s kidnapping, and eventual murder.

I received a copy from the publisher in exchange for an honest review.