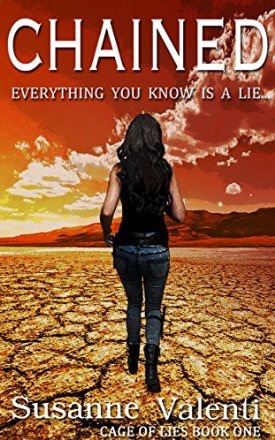 Chained by Susanne Valenti was an entertaining read about what life might be like if Al Gore is right about global warming and certain experts are right about genetically-modified foods. Scarcity, a contaminated world toxic to humans, and a powerful governing body that leaves no margin for error, no space for creativity, and controls nearly all movement within its sphere of influence are some of the elements of the world of the City behind the Wall in Valenti’s narrative. Chained is similar to Hugh Howey’s Wool, Amber Garr’s Waterproof and Edan Lepucki’s California.

The protagonist, Maya and her closest friend Taylor are found to have broken a few of the City’s rules. As their punishment, they are sentenced to be messengers for the City’s army that is fighting in the Subwars. The purpose of the wars remained unclear to this reader. Long story short, Taylor is injured by a bullet and Maya and Taylor along with a warden named Laurie, who has come to their rescue find themselves facing certain death until an unlikely hero, Coal gets them to safety. That safety though is to the world that is thought to be contaminated, a place where humans cannot survive for long. The City has instilled this belief in the minds of the Walls’ inhabitants to keep them under their thumb. From there, the three, Maya, Taylor, and Laurie find that life is not as they have been told. It is still a world of scarcity and danger, but there is also beauty, friendship, and security in certain settlements. Ultimately, it is a battle between these settlements and the City. It is this struggle that drives the narrative to its conclusion.

I liked the characters Laurie, Hunter, Coal, and Coal’s sister, Alicia, who is one tough chick. They have the capacity to survive whatever life throws at them. As far as the protagonist, Maya and her friend Taylor, I cannot say I was impressed. Taylor to me seemed like he was skating by on his father’s reputation. Think of a spoiled not-so-rich kid with his father to get him out of whatever scrape Taylor manages to get into. Of course, it does not work in the end. It never does. Eventually, the consequences catch up. Maya was out of her league and it showed. I counted seven times in which her foolhardy actions and ineptness almost cost someone their life. Maya can shoot better than average; that is about all. I can shoot; come with 15 feet of me and see. That doesn’t mean that I would be any good in combat, which is essentially where Maya finds herself in both of the worlds. Maya to me did not grow as a character. She was morally compromised when she flat out lied to Coal by pretending to not know if he had killed the King of the Creepers (deformed monster  race of humans with animal-like qualities). Prior to her conversation with Coal, she had seen the king breathing as he lay on the ground after the battle between him and Coal. Then she decides to keep to herself that the King is not really a Creeper. Is Maya an artifact of the City’s teachings? Maybe.

Valenti’s description-world building was excellent with gorgeous scenery and realistic scenes (except for Laurie, a trained warrior sticking the barrels of her guns into the dirt). The pacing was good and the story line was excellent. I had a few quibbles with some clunky language, issues with grammar and editing, and placement and/or necessity of one or two scenes.  Overall, a good first start of what has the makings of a great series.