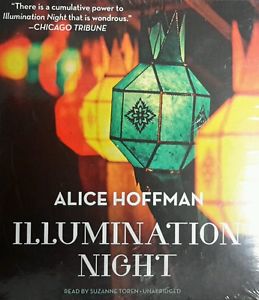 Illumination Night by Alice Hoffman is not a book that evokes good feelings, at least not for much of the time. That being said, the narrative is well-written, tight without any parts that could have been excised. Neither is Illumination Night a long book (under 8 hours audio-wise) nor overly emotional. I did feel a connection with the characters, even if it was not as up close and personal as in The Nightingale. And there was a shade of a positive ending. I classified the book as a mix of YA and adult themes.

Set in Martha’s Vineyard, off the coast of Massachusetts in Nantucket and Vineyard Sounds, there are several characters that to this reader seemed to be protagonists. There is a relatively young couple with a diminutive three to four year old son. The mother of the son has what it appears to be a hereditary strain of agoraphobia. Next door, there is an elderly woman and her granddaughter. Later on, a cast-off giant of a boy (not a fairy tale kind but one who is unnaturally tall for his age due to maybe the condition, gigantism comes to live with his grandfather after being abandoned by his mother.

The narrative switches back and forth between these and other characters. Part of the story revolves around the granddaughter’s growing up while she cares for her grandmother who has injured herself and requires help during her convalescence. The granddaughter is the rebellious sort who like a lot of teenagers thinks she knows what she wants, what is best. She is the sexual gadfly of the local high school while being an outcast in most other respects. The girl’s crush on the neighbor’s silent husband sets a lot of different things in motion, some reactionary by the wife, some the teenager’s attempt at luring and then getting revenge on the husband when he rebuffs her. In the end, the girl matures a bit, finding that her grandmother, who turns out to be the girl’s biggest defender, is not as irrelevant as she first supposed. The girl also finds love in the most unexpected of places.

In its shifts between plots, Illumination Night transcends the YA border into adult themes. Hoffman’s treatment of sex between the husband and wife, their married life with all of the ups and downs of a somewhat badly matched pair as well as the dealings between the granddaughter’s parents, who are divorced and remain bitterly argumentative with each other, and their separate relationships with their own parents and in-laws is appropriately tailored for widely-read teens.

In the end, Illumination Night is a tale of survival and adaptation. To survive, you must adapt. The silent (I’d say introspective tending toward moody) husband finds that to keep his family intact he must talk, embrace his son and give his wife the freedom to need others; the wife finds that to deal with her agoraphobia, she must reach out to those around her, an on-line doctor, her husband, her neighbor, tell them what is wrong and let them help. So too the girl finds that her world cannot be circumscribed to her crush on the husband, that what is different is not always to be scared of or shunned. They all find that love exists in the moments when we open up and let life live its course, let diversity be our guide, at particular times.