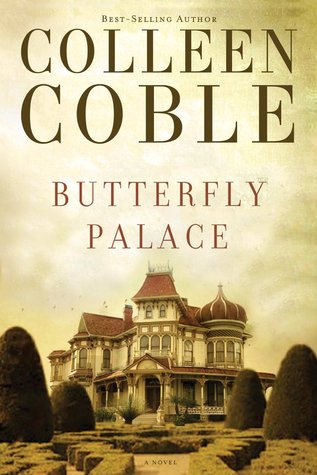 Butterfly Palace by Colleen Coble had such promise. The beginning was an excellent emotional action scene that showcased the two main characters, a couple, Lily and Drew who are engaged when the story opens. There are several plot lines—a serial attacker of servant girls, a fire in which Lily and Drew’s fathers die, a counterfeiting operation, an election campaign, a stolen rare blue morpho butterfly,

a murdered lady of means, an uncle trying to find his mid-twenties niece a husband, and Lily and Drew’s romance. Set in 1904, in two Texas cities, Larsen and Austin, the characters are drawn from real life and provided a glimpse into the beginnings of the Secret Service.

All of the plot lines were intermingled well and the narrative did not have any slow or unnecessary parts. As I said such promise. But, too melodramatic, too affected, in the presentation. I listened to Butterfly Palace as an Audible download and part of the problem was the narrator’s rendition. I have listened to many audio books, some of them theatrically rendered to great effect, some with mild levels of dramatic license here and there, and others as simple but high quality readings. In Butterfly Palace, the narrator drew out nearly every word over emphasizing and attaching artificial emotion. The end result—a cringing and tiresome. The other problems included a bit of clunky language, the disconcerting inclusion of God and faith near the end but not in the rest in the story, and too many collectors of allegedly rare and expensive butterflies in one city—one of which I found the timing of the introduction odd, and unbelievable.